Johnny Sandelson tells us why Thomas Goode & Co. needs a place at your table - GQ Magazine 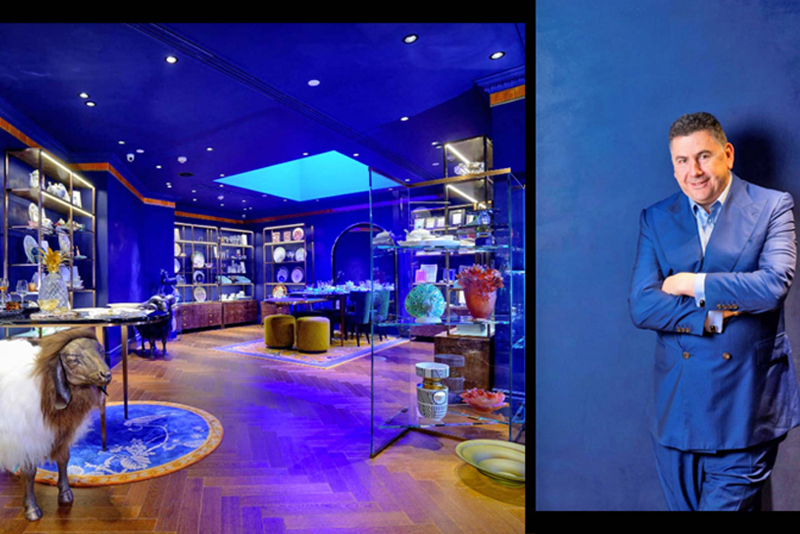 Thomas Goode & Co. is as British a brand as it comes, with roots dating back nearly two centuries, two royal warrants to boot and an iconic 18,000sqft store in Mayfair that's had pride of place since 1945. Housing eponymous collections coupled with the finest selection of China, silver and glassware from other high-end labels, clients have included the British royal family, Tsar Nicholas II, Gianni Versace and the maharajas of Baroda and Rajpipla, among others. Thomas Goode's trajectory has been nothing short of stellar and now that it's turned its attention to India, stepping outside the UK for the first time since its founding in 1827 and setting up shop at Mumbai's Oberoi hotel, we catch up with the brand's present owner and Chairman, Johnny Sandelson, for a freewheeling tête-à-tête.

Why was India the natural choice for Thomas Goode & Co.'s only outpost?

In the past we only had travelling trunk shows, where we'd show the great families of Europe and Russia our wares to purchase. For the outpost, we were invited to go to Hong Kong, Shanghai, the Middle East and the US, but I've always felt a very strong affinity to India. Thomas Goode & Co. has a nostalgic connection as well: Looking through our archives, we saw that historically, a lot of our best customers were maharajas. So we thought, let's go back to a place we feel comfortable and familiar. It's also well-known that the Indian market could be the same size as western Europe – therefore making it the most obvious place to go.

What have you observed about the Indian market, vis à vis interiors and lifestyle?

India's a bit more of a blank canvas; there's more innovation and less constraint. What I'm trying to say is there's lots of new money and people wanting to spend it on beautifully decorated things. In England, you'll find people buying in bits and pieces, while in India, people want 20 of this and that – it's a wholesale approach. It's ambitious and confident.

One of the stand-out features is the little museum next door to the store.

A brand is all about its past and its reputation. And if we're able to demonstrate to people that we've been designing, making and selling beautiful tableware for so long, it gives them confidence to know that they can come here now and have things that can be left to future generations. We have people come into our shop in London whose families have been shopping with us for over 100 years; these aren't things you're buying for now, they're things you've buying forever. And that's what the museum says… It's a trans-generational flag.

What's the most treasured artefact you own?

I'm very attached to a menorah, which dates back to the mid-1920s from Warsaw. It's an Art Deco design and because it's made of silver, there's a certain opulence to it. This was made by people who only a few years later would be exterminated, so I think it tells you of the fragility of life and how things can suddenly change. When I look at it, I have a sense that, despite inevitable change, beautiful things can live on forever and tell a tale.

How does a centuries-old brand hold its ground through ever-changing trends?

I think we're able to stay relevant because of our in-house design department, which keeps us up to date. If you look at some of our old design books, you'll see things dating back to the 19th century right up to the modern era. So, in the same way buildings change their aesthetics over time, so does tableware.

Are there any Indian designs in your collection?

Since Indians consider Lord Ganesh to bring good luck, we thought we'd have some types of figurines – some made by our crystal- makers in the Czech Republic and others in partnership with Daum, our French manufacturers.

The brand also offers a unique customisation of cutlery – can you walk us through the process?

People can sit with our designers and come up with the most fantastic, bespoke things and have something that really speaks to them. This isn't a walk-in, walk-out experience – there's a sense of joy in waiting. It's a bit like having a suit made: You want to think long and hard about it because it'll last and it's valuable.

How has the brand continuously evolved?

It was incredibly vibrant in the 19th century and the early part of the 20th century, probably less so from the 1950s, though. What we're seeing now is a newfound interest in people wanting to have beautiful things in their homes. Even through some highs and lows, we've never lost our integrity or standards of quality.

How can one apply grand table settings to everyday life in a practical way?

Just because these items are valuable, it doesn't mean they shouldn't be used every day. Precious things should be used and enjoyed but also respected – because you can't exactly shove them into a dishwasher. An act of care is an act of love. And it means that these things which are precious to you now will be loved by your children and grandchildren after you.

Today, the scales tip more in favour of causal, informal dining versus standing on ceremony with its formal counterpart – why should luxury still matter?

We all have busy lives but there's always time for meals and there'll be times you require more elegance and formality. But even if you're just having a soup at home, why shouldn't you eat it out of a nice bowl? That's what I do at home – I could be having some popcorn but I'll be sure to do so out of something beautiful. These things are to be used, not locked away.

What are your pet peeves about dining out?

Poor conversation with a boring dining companion; bad food; bad lighting; bad acoustics; poor service – do you want me to go on? [Laughs]

What comes next for Thomas Good & Co.?

Coming here might be one of the most extraordinary things we've done, with the promise of an ever-growing population that could be spending millions on our products each year. The natural thing to do next would be to focus on our e-commerce platform and then open more stores in Delhi, Hyderabad, etc. There's no point rushing around the world – I think we're making an impact in India, and we should enjoy that.